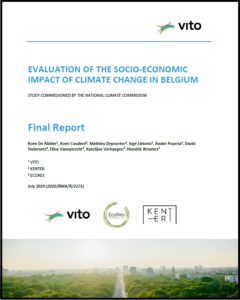 The study “Evaluation of the socio-economic impact of climate change in Belgium” commissioned by the National Climate Commission has just been published.

According to this report, global climate change in Belgium will mainly be felt through heat waves, floods and droughts. Warmer and drier summers, and milder and wetter winters are becoming normal.

This impact will affect a large number of sectors, resulting in major costs but also benefits, with costs dominating strongly. These costs relate to damage to infrastructure, increased mortality and morbidity, reduced production and losses in the forestry sector, loss of biodiversity and degradation of ecosystems, reduction of labour efficiency, losses in the energy sector, and import/export related changes.
In addition to the sectoral impacts, this report shows that groups in society, which are already vulnerable, will often also be the most vulnerable to these climate-related impacts. This strongly reflects the importance of well-considered and fair adaptation measures.

In order to enable a smooth dissemination of the information to a wide audience, a summary for policy makers was written and translated into French, Dutch and English as a supplement to the full report (only available in English).