New climatic projections have been built for the Belgian territory in the framework of the Belgian CORDEX.be project (2015-2017) which aims to combine regional downscaling expertise in Belgium.

Those projections are based on greenhouse gas concentration trajectories or RCPs (Representative Concentration Pathways) adopted by the IPCC (cf. 5th Assessment Report).

General climate trends for Belgium over 100 years can be summarised as follow:

Temperature increase will vary between +2.6 and +3.5°C compared to today. There is a slight gradient: temperatures in the north of the country will increase less than in the southeast. 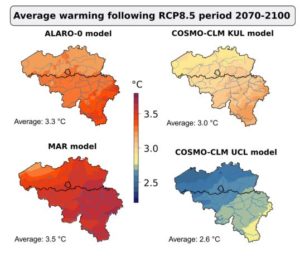 Spatial distribution of climate changes for average yearly temperature for the period 2070-2100 following RCP8.5 relative to the control period (1976-2006). The model projections shown are for the four H-Res CORDEX.be models and averages over Belgium are indicated below the maps. (source: cordex.be)

Spatial distribution of relative climate changes for average winter precipitation (left four panels) and average change of extreme precipitation (right four panels) for the period 2070-2100 following RCP8.5 relative to the control period (1976-2006). The model projections shown are for three H-Res CORDEX.be models and averages over Belgium are indicated below the maps (source: cordex.be)

More frequent and/or intense heavy rains in winter and  thunderstorms in summer are expected.

Heat waves will be much more frequent and intense. Under unchanged policy (RCP scenario 8.5), they will increase on average from 4 heat wave days per year currently to more than 50 per year in 2100. The increase will be even greater in large cities such as Brussels, Antwerp or Liège (due to the urban heat islands effect).

Changes in precipitation and evapotranspiration indicate a negative water balance during the summer months, creating a risk of water shortage.